Sonoma's rich soils mark the birthplace of California's wine industry. Sonoma County is also the closest wine region to San Francisco. Cradled between the Mayacamas and the Sonoma Mountain ranges, the Sonoma Valley encompasses a rolling patchwork of vineyards, quaint farms, and 13,000 acres of scenic parkland. In the center of the City of Sonoma, you will find the Sonoma Plaza, which is a National Historic Landmark, strewn with sprawling shade trees and bordered by carefully preserved adobe buildings.

Up the road from us in Glen Ellen, author and bohemian adventurer Jack London lived and wrote at his pristine Beauty Ranch, now an 800-acre state historic park, where you can hike and tour his Wolf House. Bodega Bay, on the Sonoma Coast, offers views of not only pristine coastline, but the infamous buildings from Hitchcock's "The Birds" along with restaurants serving freshly caught Dungeness Crab, a local favorite. Also of interest in the county is Petaluma, known for antiquing, breweries, and diverse dining, and Healdsburg for wine tasting, fine dining and posh shopping. Sonoma County with its varied towns and cities offers hot springs, horseback riding, ballooning, beaches, lakes, biking and hiking trails, Redwood groves, unique shopping, art galleries, music venues, theater, and many other interesting activities to compliment wine tasting.

Our wine country home is in the little town of Kenwood. We are surrounded by quaint townships dotting the map between the larger cities of Santa Rosa and Sonoma. Here is a little information on those closest to our heart.

The village of Glen Ellen is located at the confluence of Sonoma and Calabezas Creeks, which had served as the boundary between the Petaluma Rancho, granted to General Mariano Vallejo, Rancho los Guilicos, granted to John Wilson and his wife Ramona Carillo, and the Agua Caliente Rancho, granted to Alfarez (second lieutenant) Lázaro Piña.

Piña had served under the command of General Vallejo in Sonoma; during the Mexican-American War he was transferred to Mexico, where he died in action in 1847. His land was sold several times until it was purchased in 1859 by Colonel Charles V. Stuart.

Stuart originally named his ranch Glen Ellen for his wife, Ellen Stuart, but by the time the township of Glen Ellen was established in 1901 their home had been renamed "Glen Oaks Ranch" to avoid confusion. With its old stone buildings and virtually intact acreage, Glen Oaks appears to be the best-preserved historic agricultural property in the valley.

Joshua Chauvet was an early settler in Glen Ellen. He arrived in 1856 and played a major role in the development of the region. His grist mill and winery established what is known today as Jack London Village, and his brickyard was the source of many local buildings including the Chauvet Hotel. He helped Jack London to establish his Beauty Ranch; although they grew close over time, their friendship was severely strained toward the end of his life by legal battles over water rights. Chauvet died in 1908.

Other early settlers included Dr. C. C. O'Donnell, who developed a popular resort, Charles Justi, proprietor of a Wells Fargo station and the first postmaster of Glen Ellen's post office, and the Hon. J. B. Warfield.

As the railroads began bringing weekend visitors from the San Francisco area, several hotels were established in Glen Ellen, making local tourism, hot springs, and recreation as significant as the wineries. Through the years, many great writers have lived in Glen Ellen including Jack London, MFK Fisher, and Hunter S. Thompson.

Glen Ellen is a five-minute drive from Kenwood. As you travel Sonoma Highway towards Sonoma, turn right on Arnold Drive. Glen Ellen is a great place to go for dinner. The restaurants are all superb and friendly. There is a nice market on the main street to grab cooking or picnic supplies, wineries, a bar, and a lot of character.

Kenwood is a village of 1200 people. It sprang up halfway between Sonoma and Santa Rosa with the arrival of the railroad. Sonoma Highway/ Hwy 12 passes through it. In 1887, the Sonoma Land & Improvement Company, which owned the area, laid out the lots. First called Rohrerville for one of the owners of the land company, the name was next changed to Los Guilicos, the title of the Mexican land grant for the area. In 1895, the residents voted on "Kenwood" as the permanent name.

Kenwood is where we call home. One Mound is pretty much in the center of it all. We have a tiny local market, a few bar/restaurants, great wineries and tasting rooms, our local Depot (which used to be the train station) and lovely grassy Depot Park, and, mostly, family homes. Everyone knows everyone, and we get a chance to say hello at our little Post Office. We have our own newspaper, The Kenwood Press, detailing the local happenings. And despite the tourism, there is a real small-town feel here.

Once called Gelstone, Eldridge was a community named after Captain Oliver Eldridge. Eldridge and Gelstone were both members of the governing board of the district and had the place named for them at different times. The mild climate was one of the reasons this was chosen for the site of California Home for the Care and Training of the Feeble Minded, opened in 1891. Eldridge is a sweet little hamlet and was just recently closed down (it was more recently called the Sonoma Development Center) for poor management and abuse charges. Eldridge's fate is unknown at this time. You can drive through and see the manicured lawns and old buildings along Arnold Drive, just past Glen Ellen. It is a bit sad to have such a pretty place in limbo but we have high hopes something good will be next! 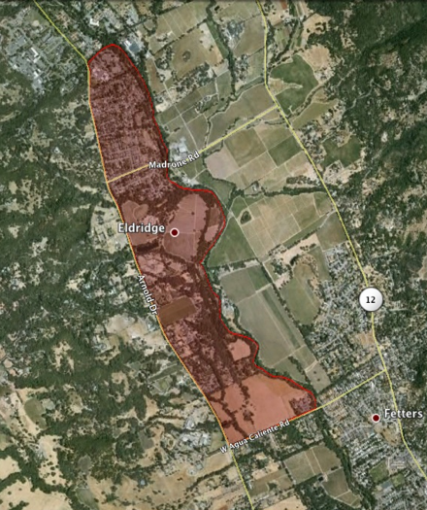 Boyes Hot Springs was named after British Captain Henry E. Boyes, who acquired the property in 1888.

The history of the community of Boyes Hot Springs and the Sonoma Mission Inn dates back to the Native Americans who were the first to discover the natural underground hot mineral waters here. They were drawn to the hot springs as a natural source of heat for bathing, food processing, cooking, ceremonies and medicinal treatments. The site was considered a sacred healing ground and a sweat-house stood near the spring for generations.

In 1849, Dr. Thaddeus M. Leavenworth, an eccentric San Francisco physician, was the first to commercially develop the hot springs. He constructed a small bathhouse and a tank on the site to create the pioneer health resort of the county. According to some accounts, Dr. Leavenworth had a particularly heated argument with his wife, burned the bathhouse, filled the tank with earth, and went out of business.

In 1895 Captain Boyes drilled a well and struck 112°F water at 70 feet. By 1900 he had built the Boyes Hot Springs Hotel on the site and soon, well-to-do San Franciscans were arriving by boat and train to take the waters at the finest hot mineral water resort in California. In 1923, a disastrous fire destroyed the hotel and most of Boyes Hot Springs. Around 1900 Captain Boyes sold the resort and retired.

A hotel brochure in the 1920's enticed guests with "electric lights and running water throughout,... competent masseurs and masseuses,... moving pictures changed nightly,... vaudeville...and the largest mineral water tank in the world - a cure for rheumatism, stomach, kidney and nerve troubles, malaria, etc." As the Golden Gate Bridge was not constructed yet, a ferry ride across the bay and an 80-cent train ride brought guests to the depot on the hotel's grounds. In 1923, a fire destroyed the hotel and most of Boyes Hot Springs.

In 1927, the current Sonoma Mission Inn rose from the ashes as an architecturally accurate replica of a California mission and San Franciscans who were "lovers of pleasure and seekers of health" flocked to the Inn. The local newspaper proclaimed "Sonoma Valley now has one of the finest hotels in all Northern California. With the convenience of auto ferries and modern highways superseding the trail over the hills and a luxurious hotel arising on the site of primitive mineral springs, all the world is destined to find its way to Boyes Hot Springs."

During the Great Depression of 1929, the resort went into receivership and remained dark for four years. In 1933, Emily Long, a hotelier from Grass Valley, bought the inn and restored it to prosperity. In 1943, during World War II, she turned control of the hotel over to the Navy who used it as "R & R" for sailors and marines for the next two years. Permanent locals Sylvia Sebastiani and Mrs. Spreckles organized weekly dances at the inn for the troops.

During the following years, the inn went through many incarnations and in the 1940's professional sports teams like the Cleveland Browns, Chicago Bears, San Francisco Seals, and Oakland Oaks used the inn as training headquarters.

A major renovation in 1980 returned the Inn to it's 1920's grandeur. With the addition of a world-class European Spa in 1981, the resort began to attract visitors from all around the world.

Finally, in 1993, things came full circle in Boyes Hot Springs when a two year search for the legendary waters of Dr. Leavenworth and H. E. Boyes yielded a new source of 135°F natural artesian mineral water 1,100 feet beneath the Inn. This water is once again being used in the pools and whirlpools of Sonoma Mission Inn.